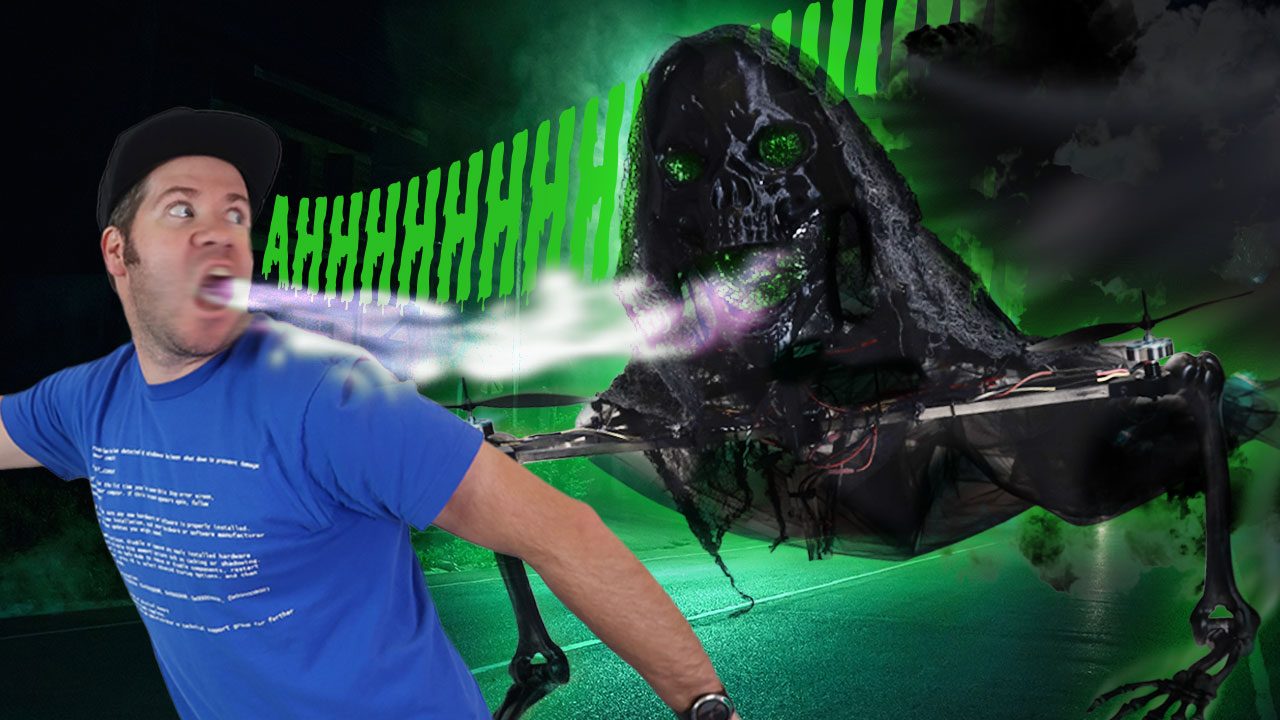 For this Halloween I built a life-size dementor that actually flies! We flew it around and had all the Harry Potter fans casting their best Patronous!

Years ago I came across a YouTube video of a glowing flying ghost and have wanted to build one myself. Originally I thought the ghost would look the best as a bicopter, with two motors. However, my math was off and I ended up with a tricopter. Regardless, it ended up looking amazing while flying through the air. During testing, a mom in her minivan stopped and told me it was the coolest thing she’s ever seen.

Previously I’ve used the hexTronik DT750 motor in a bicopter and it had tons of power. Each motor with a 11×4.7SF prop should produce around 1kg or 2.2lbs of thrust. With two motors, I should have been able to lift around 2kg or 4.5lbs.

The original design used 1/2″ wooden square dowels from the local hardware store. Using the rcexplorer tricopter tilt mechanism as inspiration, I designed the tilt mechanism using a low cost digital metal gear servo that seemed to have plenty of torque. The screw to hold the servo horn on turned out to be a standard M2.5 bolt, so I found an easy to order M2.5x20mm bolt to use as the axle for the tilt mechanism. After deciding on that, it just took modeling the servo, the motor base, and the dowel to design the parts I could print using my 3D printer with PLA.

For R/C helicopters like this, zipties are the best mounting option possible. They strengthened the 3d printed parts and make it incredibly simple to replace parts if they broke.

Tuning the controls for such an odd bicopter proved difficult. After a couple crashes, I was able to dial in the autopilot. One of the issues was that the motor were quite heavy so when the servos moved rapidly, the frame would move significantly as well. That created a feedback look that caused instability if the control values went too high. Additionally, when I added the head of the dementor, the CG moved to close to the axis of rotation for the tilt mechanism, making the aircraft unstable. I ended up moving the battery significantly lower, which helped stability significantly.

After assembling the bicopter frame and testing it multiple times, I was now ready to add the decorations. Unfortunately, the decorations turned out to be heavier than I expected. The black cheesecloth material I had selected alone added over 200g alone to the aircraft. The skeleton mask turned out to weigh in at over 300g. Once assembled, my aircraft was around 1.5kg. With over 2kg in thrust, it still might have flown. However, I quickly discovered that the thrust numbers that I had weren’t quite right.

Using a power meter, I determined that each motor was producing under 150W of power at full throttle. The aircraft would barely leave the ground. It turns out that the autopilot I had selected scales down the throttle input in order to keep some overhead available for control. I was missing over 100W of power, which was enough to keep the aircraft from flying. Generally, you really do want overhead for the control, otherwise as the power drains from the battery, you might unexpectedly and prematurely lose power.

The Solution: Add a Motor and Make a Tricopter

With only a couple days left, and not enough time to order a different power system for the aircraft, my best option was to add another motor. I always buy extras of components like the motors, and it proved to be extremely useful in this case.

In order to give the tricopter some bulk for the frame, I opted to use 3/8″ square dowels instead of the 1/2″ and make it a triangle instead of a Y. I was able to remove the 1/2″ dowel with the arms and mount them on tricopter frame. The arms also made decent landing gear with the addition of a wire on the back of the aircraft to create a tripod. Unfortunately, I ended up having to redesign the servo and motor mounts to accommodate the 3/8″ dowels, as well as design some new pieces to join the frame together.

With the third motor, I should have had around 3kg or 7lbs of thrust for an aircraft that weighed around 1.5kg. I also removed a lot of the cheesecloth and opted for some lighter weight tulle to provide the flowing cape. Tuning the tricopter proved to be incredibly simple and much easier than the bicopter.

After putting a lot of time and effort to wire up the FPV video, it ended up being unusable. I originally mounted the camera in the mouth of the head, which would have worked on the bicopter, but failed on the tricopter. The head experienced a lot of vibration on the tricopter and the video was overly choppy and unpleasant. In order to save weight, I scrapped the video. The tricoper frame, with the flowing material, also lacked many, if any, options for mounting a camera. If I were to do it again, I’d probably adjust the design to include a location for a camera, perhaps behind the rear motor.

Despite the setbacks, I was able to get the dementor to fly on Halloween. Due to the color of the dementor, it didn’t show up on camera all that well. However, in real life it looked amazing in the air. The size of it with the arms hanging down looked surreal. People who saw it in person expressed shock and awe as it buzzed around. My neighbors also recognized it as a dementor, which validated my design choices.

If I could go back and do it again, I’d probably start with a tricopter. Bicopters like the one I built don’t size up particularly well, due to torques from a heavier motor and prop. The tilt mechanism performed better than I could have possibly imagined. I really only struggled to mount the motor to the motor mount. The design I landed on ended up being incredibly durable and functional, even with several crashes and broken props.

You can find the 3D parts on Thingiverse 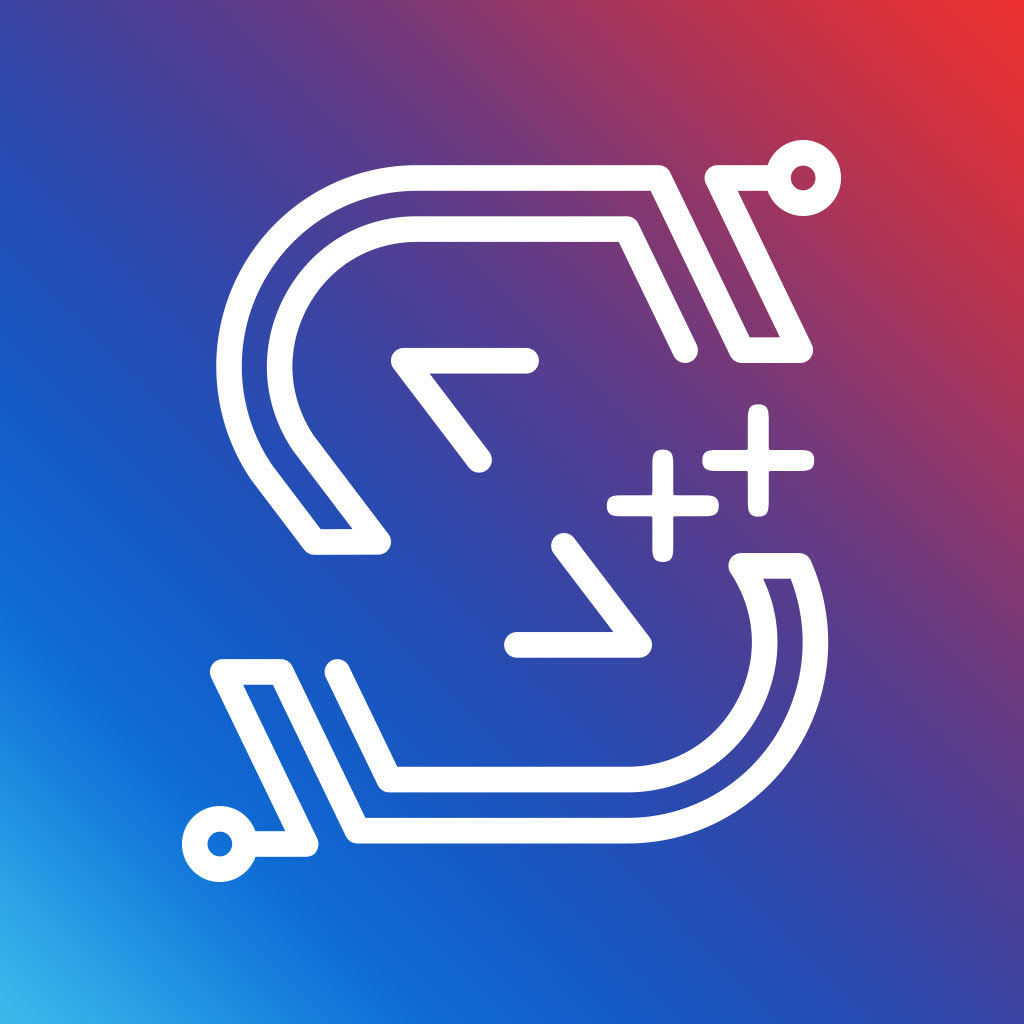